The History of Leavesden Asylum 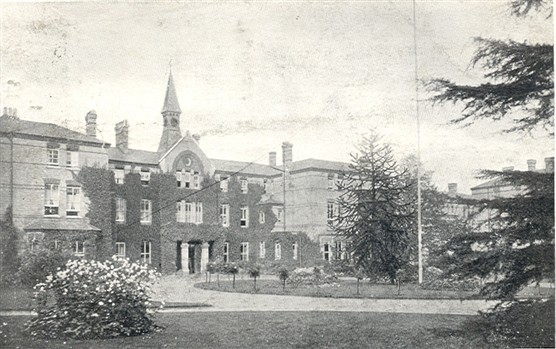 The foundation stone for Leavesden Asylum was laid on 31st October 1868 by the Chairman of the Management Committee, William Henry Wyatt, J.P. The first patients were not admitted until 9th October 1870, the same date as the opening of Caterham Asylum. Both Asylums were built and run by the recently constituted Metropolitan Asylums Board for the care of “insane paupers” who were “such harmless persons of the chronic or imbecile class as could lawfully be detained in a workhouse”. “Dangerous or curable” patients were to be sent to the county lunatic asylums.

By 15th October Leavesden had over 100 patients and within six months all the female accommodation was in use and storerooms had been converted into bedrooms to provide extra accommodation. At first children were admitted along with adults, but from 1873 the children were sent to Darenth Training Colony. However, both Caterham and Leavesden were soon full to capacity.

The need for extra accommodation was a continuing problem and in 1872 a new block was opened to provide accommodation for laundry staff and those patients who worked in the laundry. A further storey was added to this block in 1900. By November 1876 Leavesden was housing 2,118 patients, vastly more than the 1,500 it had been built for. This meant there was ever increasing pressure on beds and staff. In 1903, a further Asylum was built at Tooting Bec although this provided only temporary relief for Leavesden as it was rapidly filled with patients transferred from the workhouses. In 1909 the process of modernising and altering all the ward blocks to take the increasing numbers of elderly and infirm patients into account, was begun. This process was completed by 1931.

The First World War led to acute staff shortage as many of the nursing staff joined the armed forces. Twenty-two members of staff died on active service. Troops were billeted in the Recreation Hall for a few months and officers were quartered on the Medical Superintendent. In 1918 the staff shortage was so acute, three wards had to be closed, and these were not all reopened until 1921.

Further modernisation took place between 1929 and 1931 with the installation of electricity and other changes to improve conditions for the patients at the hospital.

In 1930 the control of Leavesden was transferred to the London County Council under the Mental Hospitals Committee. Leavesden hospital was assigned the special function of caring for ‘mentally subnormal persons’ described as ‘adult idiots and low-grade imbeciles’ and also retained the continued treatment of TB cases.

In 1932 the Saint Pancras Industrial School, or Leavesden Residential School, closed and the site, situated opposite the hospital, was purchased for use as an annexe to the hospital. It was to be used for those patients who needed only routine medical care rather than the more structured observation of the hospital. The idea was to help patients who were ready to begin to acclimatise to greater freedom in preparation for their discharge into the community.

The Second World War saw the annexe designated as an Emergency Hospital and the patients were transferred back to the main building. Leavesden was also used to accommodate some patients from Saint Bernard’s Hospital, Ealing following bombing in 1944 and children from the Fountain Hospital, Tooting. Hutted buildings were erected in the Annexe grounds and were used for the treatment of war casualties including French survivors from Dunkirk. The Emergency Hospital closed in 1943 and was taken over first by wounded Canadian soldiers and their nursing staff and later by an English Teachers’ Training College. The hospital suffered no serious damage during the war but it took years to get back to pre-wartime levels of staffing and maintenance. The Annexe was occupied by the Training School until 1950, which led to overcrowded and understaffed wards on the main site.

The Hospital became part of the National Health Service in 1948 and was under the jurisdiction of the North West Metropolitan Regional Hospital Board through a Hospital Management Committee. January 1948 saw the establishment of the Preliminary Training School under the control of two senior nurses. This gave probationers the opportunity to work towards certification and recognised qualifications. The 1950’s and 1960’s saw the development of training schemes for the young adults at Leavesden, with the aim of enabling them to find local employment.