His family probably shuttled him around between their homes. The date was 4 February 1891, and it appears that his mental health had now deteriorated to a state that the family, who had been sheltering and supporting him, could no longer cope. On his admission, the register of patients stated that he was suffering from ‘mania’ and he was examined by a doctor, Edmund Houchin, who wrote a report on his findings and declared Kosminski insane: I personally examined the said Aaron Kosminski and came to the conclusion he is a person of unsound mind and a proper person to be taken charge and detained under care and treatment. a) Facts indicating insanity observed by Medical Man, viz: He declares that he is guided and his movements altogether controlled by an instinct that informs his mind, he says that he knows the movements of all mankind, he refuses food from others because he is told to do so, and he eats out of the gutter for the same reason. b) Other Facts Indicating Insanity Communicated by Others Jacob Cohen, 51 Carter Lane, St Paul’s EC says that he goes about the streets and picks up bits of bread out of the gutter and eats them, he drinks water from the tap & he refuses food at the hands of others. He took up a knife and threatened the life of his sister. He says that he is ill and his cure consists in refusing food. He is melancholic, practises self-abuse. He is very dirty and will not be washed. He has not attempted any kind of work for years. Houchin ended his report with the words ‘The said Aaron Kosminski appeared to me to be in a fit condition of bodily health to be removed to an asylum, hospital or licensed house.’

From the workhouse, he was taken to Colney Hatch Asylum on 6 February 1891. Th is institution was opened at Friern Barnet in July 1851 as the second pauper lunatic asylum for the county of Middlesex. Designed in the Italianate style, it had 1,250 beds, making it the largest and most modern institution of its kind in Europe. Within ten years it was enlarged to take 2,000 patients. It had its own cemetery (closed in 1873 after which the patients were buried in the Great Northern Cemetery in New Southgate), its own farm on which many patients were employed, its own water supply, and its own sewage works built after the local residents complained of untreated sewage from the asylum flowing into a nearby brook. The Colney Hatch admission register describes Kosminski as twenty-six years of age, Hebrew, single and, again, a hairdresser. Th e cause of his condition, originally entered as ‘unknown’ was amended in red ink to ‘self abuse’ and the period of his current ‘attack’ was initially listed as ‘6 months’ but again amended to say ‘6 years’, suggesting that Aaron had been showing mental health problems since 1885, when he was twenty. It was recorded that he was not deemed to be a danger to others. Brother Woolf was again listed as nearest relative.
FORM OF DISORDER MANIA Observations Ward 9.B3.10 On admission patient is extremely deluded & morose. As mentioned in the certificate he believes that all his actions are dominated by an ‘Instinct’. Th is is probably mental hallucination. Answers questions fairly but is inclined to be reticent and morose. Health fair.

F. Bryant 1891 Feb 10: Is rather difficult to deal with on account of the dominant character of his delusions. Refused to be bathed the other day as his ‘Instinct’ forbade him.

F. Bryant April 21: Incoherent, apathetic, unoccupied; still has the same ‘instinctive’ objection to the weekly bath; health fair. Wm Seward 1892 Jan 9: Incoherent; at times excited & violent – a few days ago he took up a chair, and attempted to strike the charge attendant: apathetic as a rule, and refuses to occupy himself in any way; habits cleanly. health fair.

This last note shows that Aaron Kosminski was transferred to the overcrowded Leavesden Asylum near Watford in Hertfordshire in 1894, where conditions were far worse than at Colney Hatch. No reason was given for the transfer, but it is possible that his intractable condition meant that he was never going to be rehabilitated. When he was admitted to Leavesden his bodily condition was noted down as ‘impaired’. For the first time, his mother Golda is listed as his next of kin, her address given as the house where his sister Matilda and her family lived. The sparse notes taken at Leavesden relating to the last years of his life, which were procured for me by the archivist at the LMA, show that his behaviour continued to fluctuate, and later on his physical health also began to deteriorate. The notes below from Leavesden have been compiled from various loose sources in the records and have been arranged in chronological order to give a better sense of Kosminski’s decline:

10/9/10: Faulty in his habits, he does nothing useful & cannot answer questions of a simple nature. BH [bodily health] poor. AKM

29/9/11: Patient is dull & vacant. Faulty & unhealthy in habits. Does nothing useful. Nothing can be got by questions. BH weak. H.C.S.

16/1/13: Patient is morose in manner. No sensible reply can be got by questions. He mutters incoherently. Faulty and untidy in his habits. BH weak. AKM

1/4/14: Patient has hallucinations of sight and hearing, is very excitable and troublesome at times, very untidy, bodily condition fair.

G.P 14/2/15: Pat merely mutters when asked questions. He has hallucinations of sight and hearing and is very excitable at times. Does not work. Clean but untidy in dress. BH fair. DNG.

1/11/15: Patient has cut over left eye caused by knock on tap in washhouse.

2/2/16: Patient does not know his age or how long he has been here. He has hallucinations of sight and hearing & is at times very obstinate. Untidy but clean, does no work, B.H. good. JM 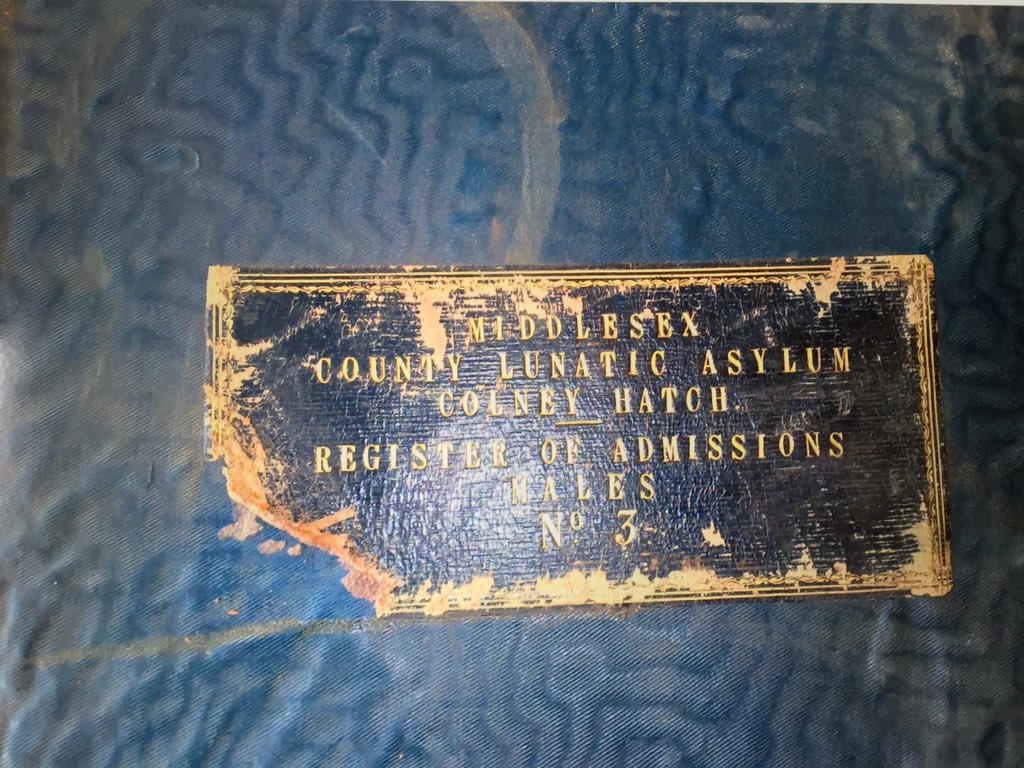 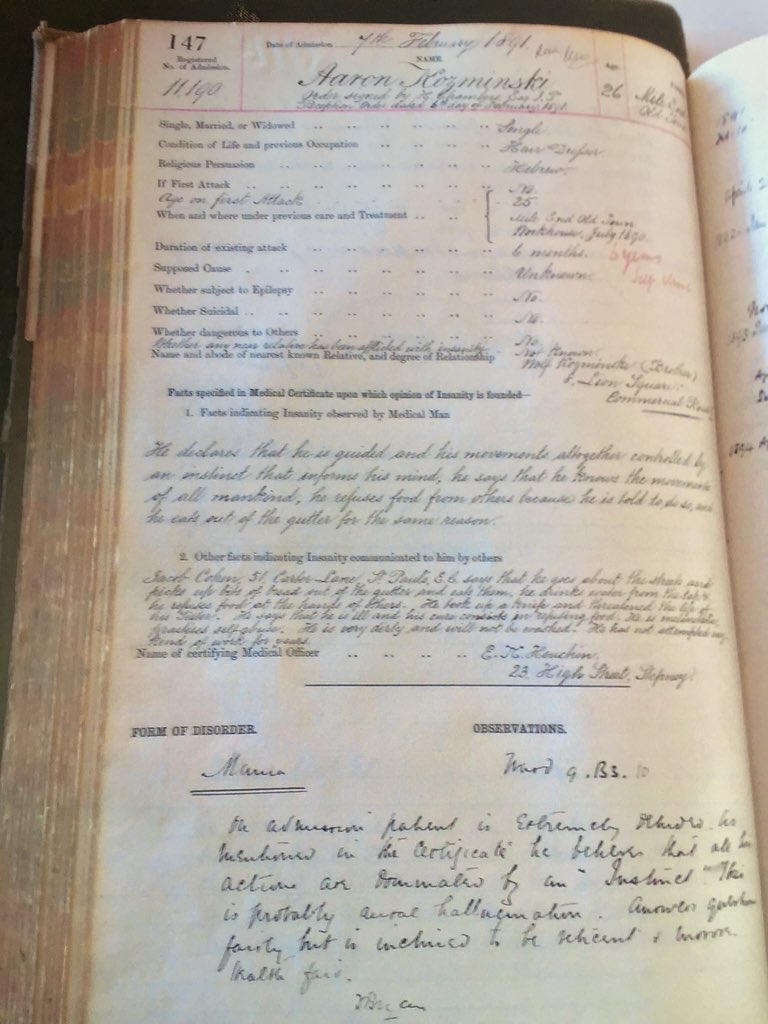 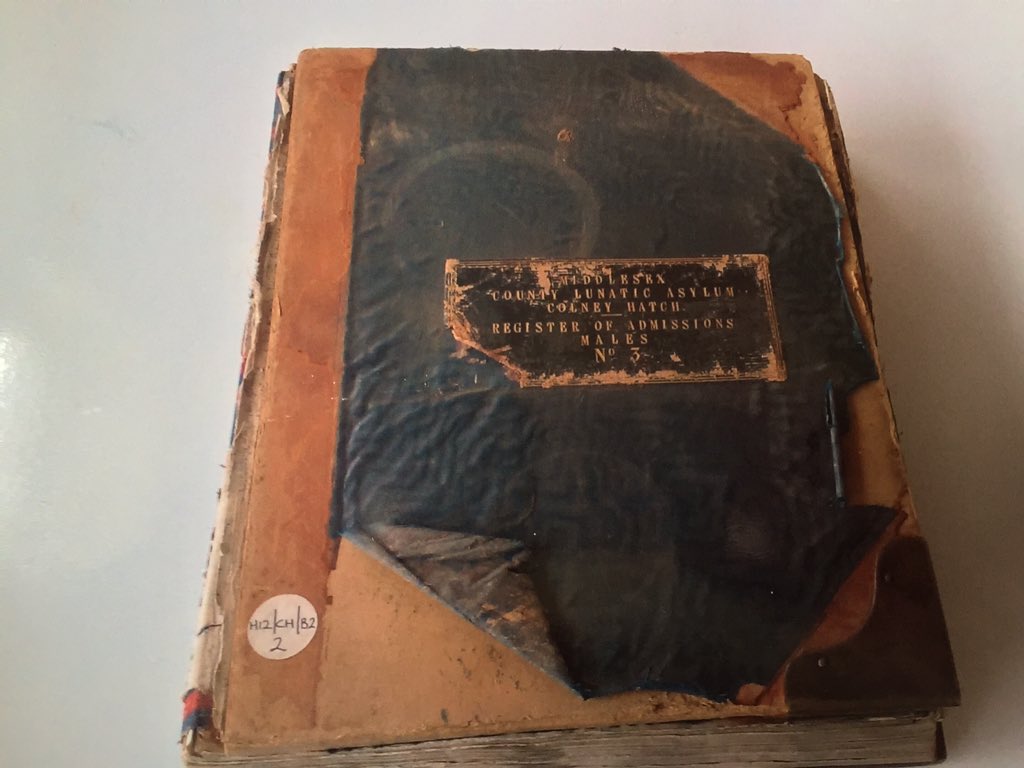 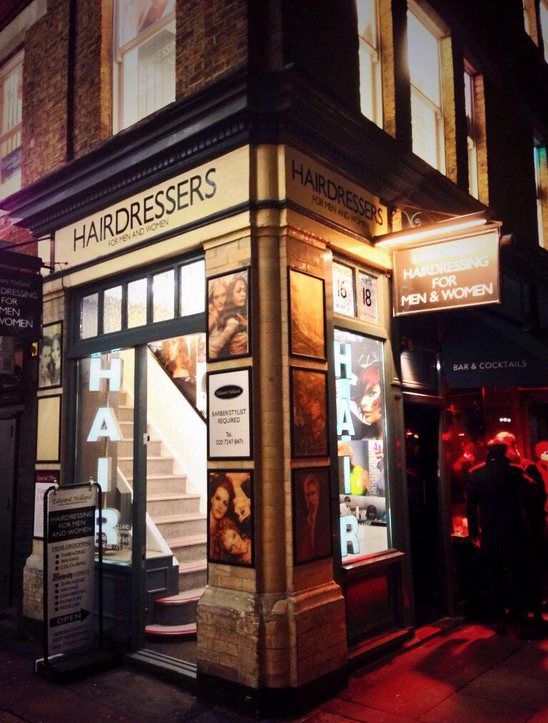 On Kosminski’s asylum record, his occupation was that if a hairdresser, or hairdresser surgeon… 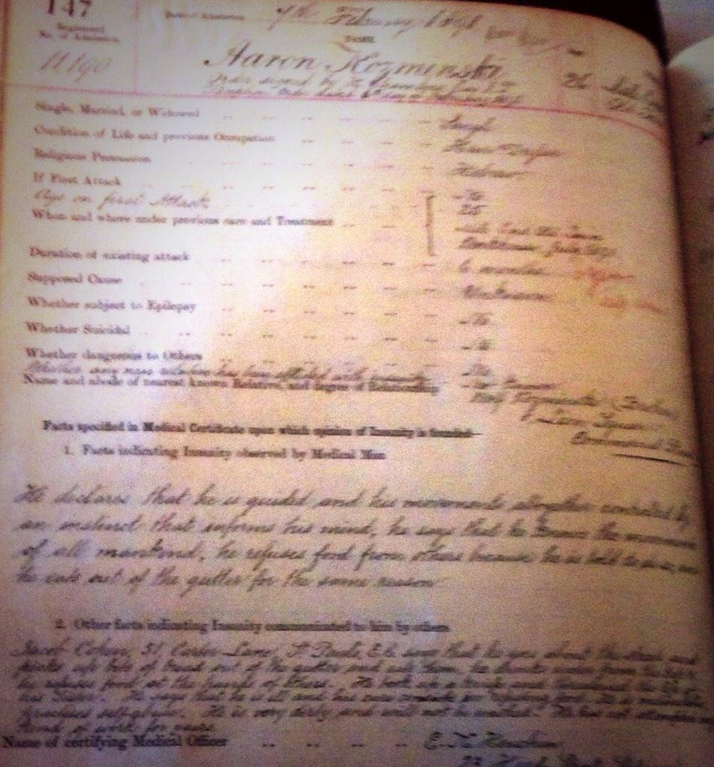 As it faintly shows here… 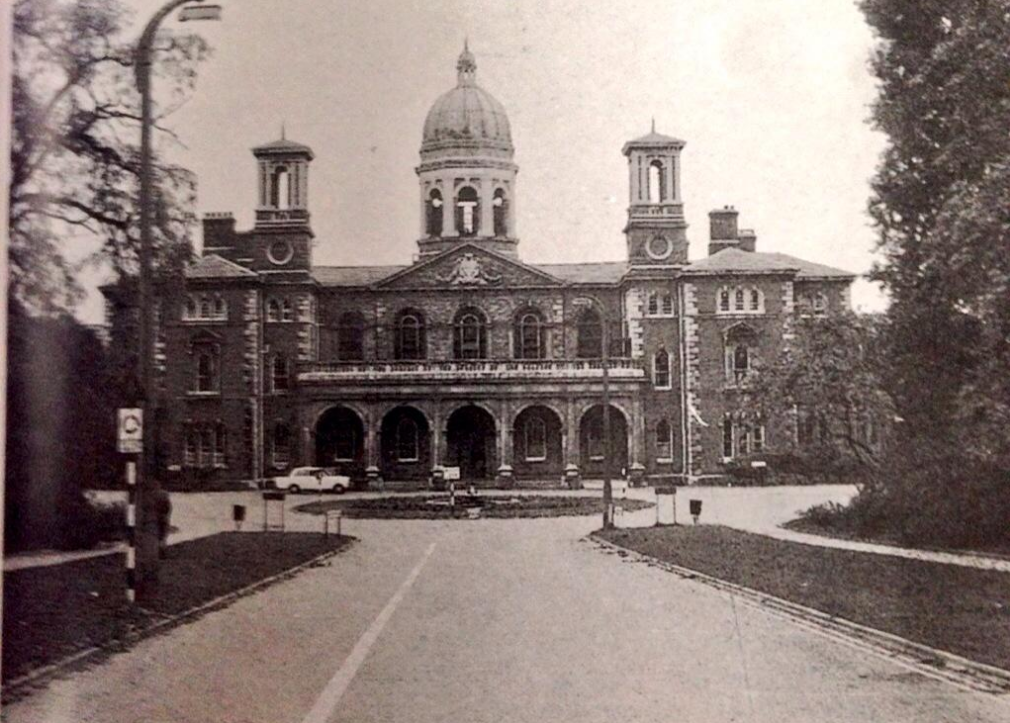 Colney Hatch Asylum, this is where Kosminski was incarcerated… 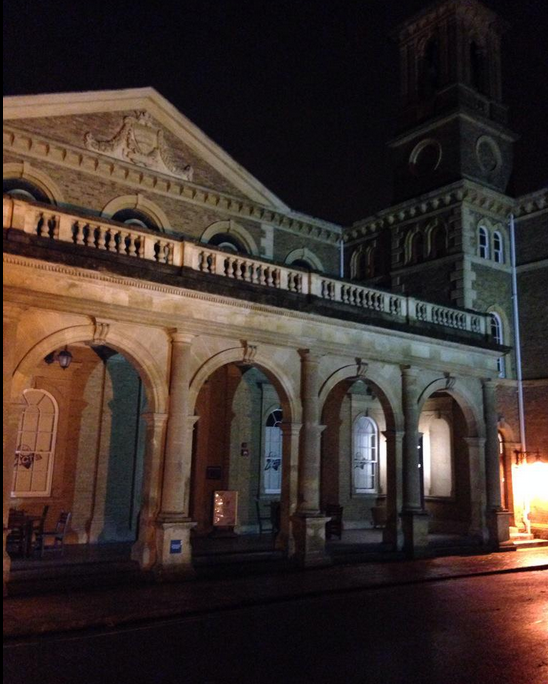 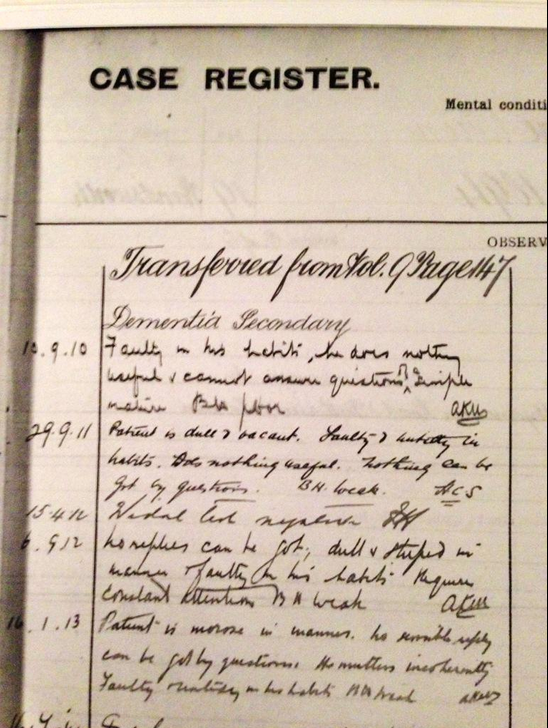 He was transferred to Leavesden Asylum… 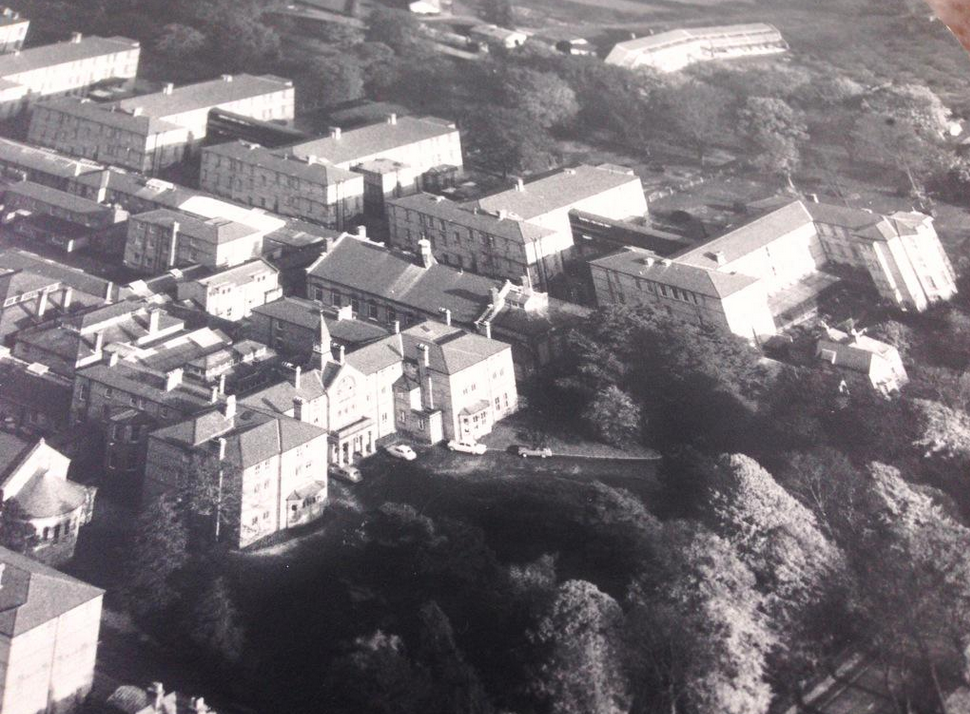 Leavesden at the time of Kosminski… 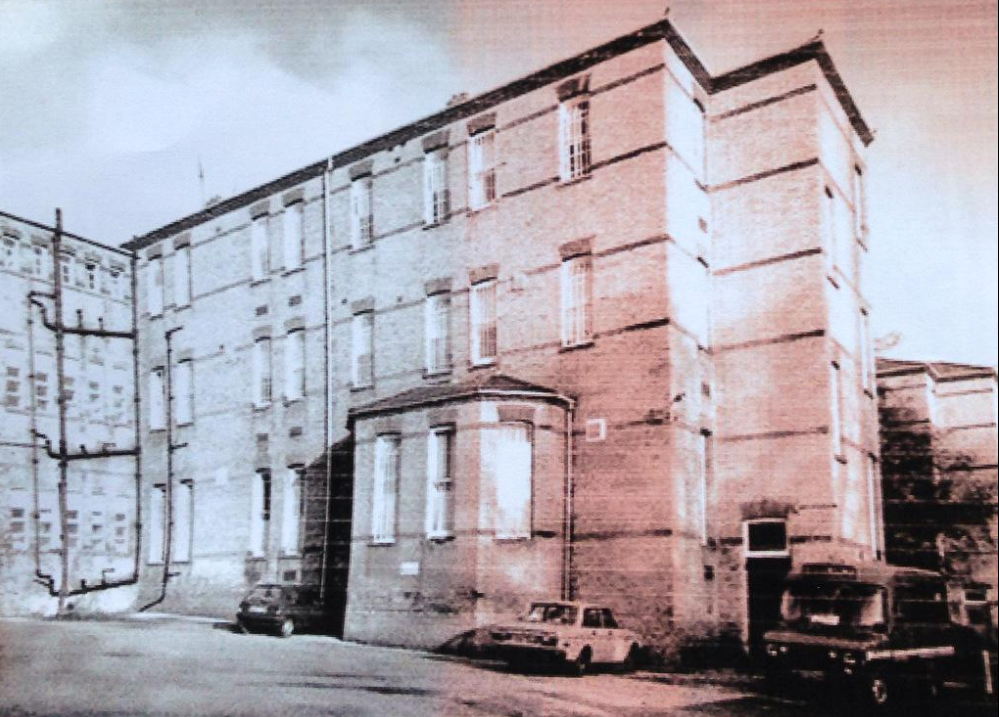 His ward. This is where the Ripper ended his days… 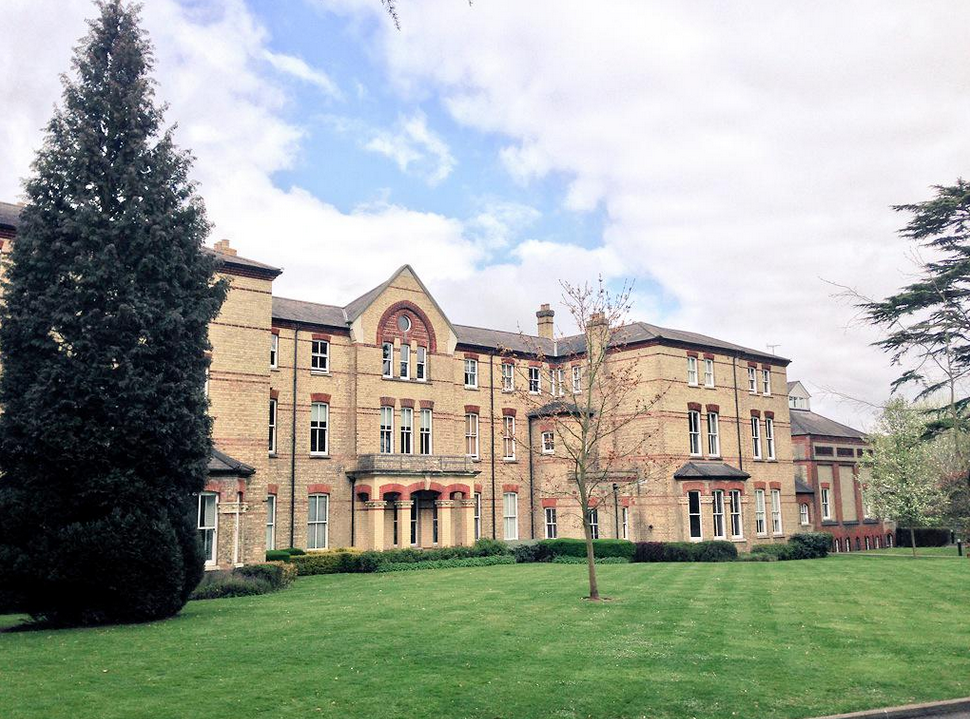 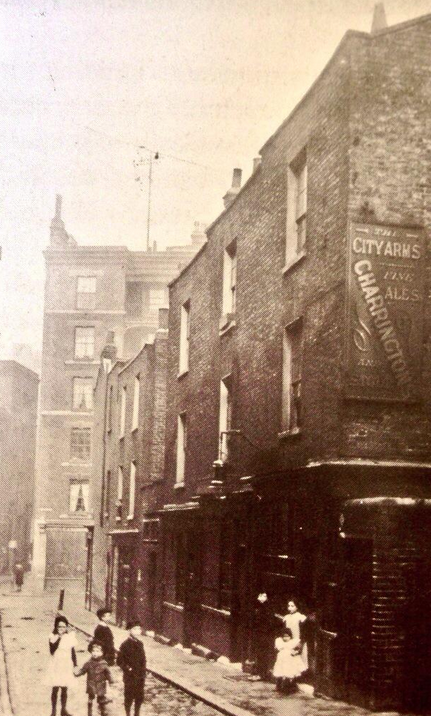 The streets of London were never stalked by the Ripper again…