The History of the Shawl 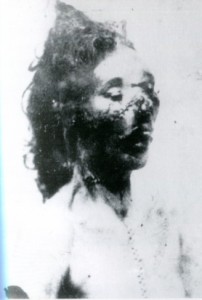 It was originally recorded that Catherine Eddowes was wearing the following at the time of her murder.

Amos Simpson kept the shawl and took it home with him for safe keeping never to be exposed to the public again for over 100 years.

In 1993, the curator of the Black Museum, Bill Waddell acquired a silk screen printed shawl. He recorded that it had been in the donor’s family for years and a large section had been cut out, reputedly by the mother of the donor, because she did not like the blood stains on it. He was told that it was the shawl found on the body of Catherine Eddowes the night she was murdered.

The man who leant the shawl to the Black Museum was an antiques dealer named David Melville Hayes of Arabella Vincent Fine Art. David had been told the story of the shawl that had been passed down his family for he was the great great nephew of Amos Simpson.

David was told that Amos Simpson was the first police constable to find the body in Mitre Square. He had picked the shawl that night and kept it. Amos was on some kind of special duty, which he assumed to mean that he was in plain clothes on surveillance duty with two or three other officers. He remembered seeing the shawl for the first time when he was 8 or 9 years old, when it was kept in an old sea chest with waxed rope handles at his grandmother’s house. The chest was about 18”x15”x4’. His mother also recalled it being kept in this chest, which is now in David’s possession.

She recalled how her mother kept their Sunday best clothes in the same chest with the shawl. One corner of the shawl is tattered and some material has been cut away. David has always assumed that this had been bloodstained and his grandmother had cut this off and thrown it away, also dabbing one or two more stains with bleach. (David himself had cut out two sections which were later framed).

Amos’ niece, Eliza (David’s grandmother), had been nannying in London in Plaistow, near to where Amos lived when he was in the police service. (This was in Queen Street, Camden Town). He had kept close contact with Eliza, being protective of her, and he passed the shawl into her keeping. (Amos’ wife didn’t want to have the shawl because of its connections and kept it out of sight). David presumed that this was because Eliza was a dressmaker and the piece of silk might have come in useful.

David and his mother, Elsie Hayes, were interviewed about the history of the shawl, though aged 95 at the time, she was still able to give an account of the story that was told to her. She remembered that her mother, Eliza, claimed that Amos had told her to look after the shawl as it might be valuable one day. She kept it in a chest and never bothered to look at it again.

She might have used it for dressmaking, but she was too busy looking after all the children. She had seen the shawl in her youth, when Amos was still alive, but was told very little about it. It was something to do with the Ripper and Eddowes. When asked if she knew how he got it, she replied “No-one knows. He was on duty then, he must have taken it off her. It got into his hands anyway!”

Elsie left home when she was 15, just before Amos died, (in 1917). She went to Nanny in Newmarket, Suffolk before moving to Plaistow, East London, where she worked for a Dr. Kennedy and his wife, sister of Robert Falcon Scott of Antarctic fame. Their father was a rector of Lavenham and it was he who recommended Elsie for the position.

In 1919, Elsie became a housekeeper to Frank Reynolds, cartoonist of Punch Magazine, a position she held for 5 years. Frank Reynolds’ wife, Winifred Milne, was acquainted with Emily Pankhurst, the leader of the Suffragettes, who often stayed with the Reynolds in Ealing. David’s mother told of how, on occasion, she would take Emily breakfast or an early cup of tea and was once left a crown by her.

She remembered Amos being very kind and very nice and something of a favourite with the family. He came to Sunday lunch regularly, though not with his wife who was tiny, “a poor little thing”. She also remembered being taken out in her pram to Barrow Hill, Acton, to the cottage where Amos lived in his retirement.

Amos spoke fondly of his time in the Police but when asked if he ever talked about the Ripper she replied, “What he didn’t tell us, mother did” which amounted to the fact that it was dangerous to go out at night.

David was slightly confused as to how much the story had come from his mother and how much from his grandmother as this was a long time ago when he was in his youth. As the interview progressed, it became clear that Elsie knew very little about the shawl’s history and that Eliza was the main source.

Amos Simpson was traced via his son’s, (Henry Simpson), birth certificate which confirmed the occupation of Amos as Police constable. Henry was born in 1877 and at that time the family lived at 35 Queen Street Camden Town. Amos was traced in Metropolitan Police records as an acting sergeant in N division (Islington).

Amos was remembered as a very upright and moral man by his family. The report of his death in the Suffolk and Essex Free Press April 18th 1917 reads:

The parishioners mourn the death of an old and highly respected parishioner in Mr Amos Simpson (late of the Metropolitan Police) of Barrow Hill, Acton, who passed away on April 10th at the age of 70 years. Mr Simpson served for 25 years in the Police, for 13 years at St Pancras, London and 12 years at Cheshunt, Herts. From there he retired to his birthplace to end his days.

His wife died 5 years ago and since then he has been attended to by his devoted daughter who lost her husband (killed in action) on September 13th 1916 leaving 5 young children. His son and daughter in law came to spend the Easter with him and they had a pleasant time. Mr. Simpson was very cheerful on the Monday morning and sang “the Last Rose of Summer” to the monophone. He was taken suddenly ill in the evening and died on Tuesday morning at 8 o’clock leaving 1 son, a widowed daughter, a daughter in law, 5 grandchildren and many relatives and old friends to mourn their loss.

He will be greatly missed by all, being a devoted husband, loving father and a warm friend.

In March 2007, David Melville Hayes decided to sell the shawl that had been in his family’s possession for over 118 years as his health was deteriorating and he had no descendants of his own. So upon his death, the shawl would slip away and one of the only truly traceable pieces of evidence that could one day prove the identity of Jack the Ripper would be lost forever.

The proceeds of the sale, as I’m told, were donated to the RNLI as he wished to make no profit for himself.