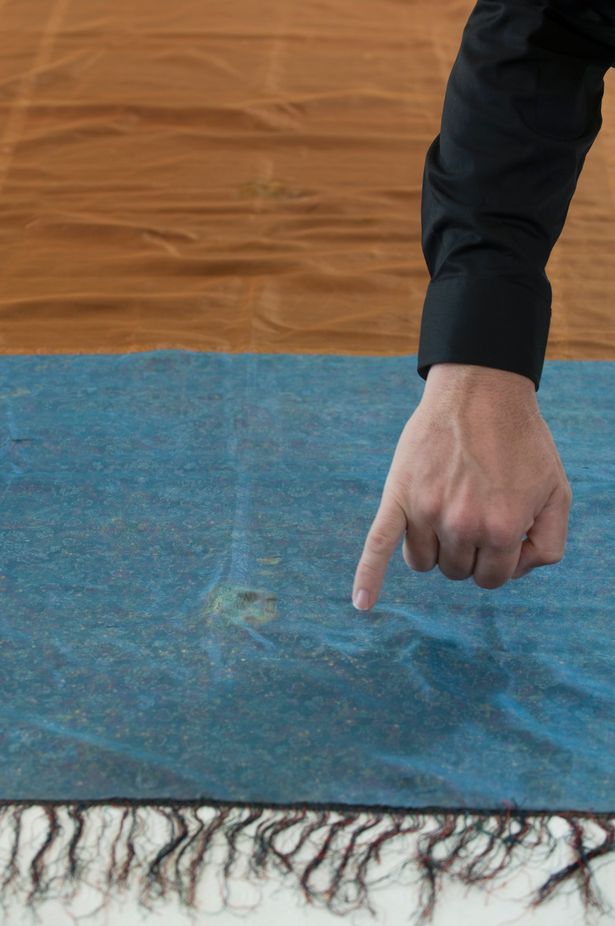 When Russell Edwards first approached me in 2011, I wasn’t aware of the massive levels of interest in the Ripper case, as I’m a scientist originally from Finland.

But by early this year, when I realised we were on the verge of making a big discovery, working on the shawl had taken over my life, occupying me from early in the morning until late at night.

It has taken a great deal of hard work, using cutting-edge scientific techniques which would not have been possible five years ago.

To extract DNA samples from the stains on the shawl, I used a technique I developed myself, which I call ‘vacuuming’ – to pull the original genetic material  from the depths of the cloth.

I filled a sterile pipette with a  liquid ‘buffer’, a solution known to stabilise the cells and DNA, and injected it into the cloth to dissolve the material trapped in the weave of the fabric without damaging  the cells, then sucked it out.

I needed to sequence the DNA found in the stains on the shawl, which means mapping the DNA by determining the exact order  of the bases in a strand. I used polymerase chain reaction, a technique which allows millions  of exact copies of the DNA to be made, enough for sequencing.

When I tested the resulting  DNA profiles against the DNA taken from swabs from Catherine Eddowes’s descendant, they were a match.

I used the same extraction method on the stains which had characteristics of seminal fluid.

Dr David Miller found epithelial cells – which line cavities and organs – much to our surprise, as we were not expecting to find anything usable after 126 years.

Then I used a new process called whole genome amplification to copy the DNA 500 million-fold and allow it to be profiled.

Once I had the profile, I could compare it to that of the female descendant of Kosminski’s sister, who had given us a sample of  her DNA swabbed from inside  her mouth.

The first strand of DNA showed a 99.2 per cent match, as the analysis instrument could not determine the sequence of the missing 0.8 per cent fragment  of DNA. On testing the second strand, we achieved a perfect  100 per cent match.

Because of the genome amplification technique, I was also able to ascertain the ethnic and geographical background of the DNA I extracted. It was of a type known as the haplogroup T1a1, common in people of Russian Jewish ethnicity. I was even able to establish that he had dark hair.

Now that it’s over, I’m excited and proud of what we’ve achieved, and satisfied that we have established, as far as we possibly can, that Aaron Kosminski is the culprit.

Dr Jari Louhelainen is a senior lecturer in molecular biology at Liverpool John Moores University and an expert in historic cold-case forensic research.